Dredge America was selected as the most qualified contractor to perform marsh restoration services for the Blackwater National Wildlife Refuge (NWR).

The project, located in Cambridge, Maryland capitalizes on the experience and expertise Dredge America gained from the Prime Hook Restoration Project.

Our goal for the project was to remove and place approximately 26,000 cubic yards of sediment to restore up to 30 acres of the fragile marsh habitat.

Completing the first large-scale wetland restoration project ever attempted at Blackwater, and the first thin-layer project in the Chesapeake watershed, the restoration was a resounding success, having been completed on time and under budget.

The non-profit owner, The Conservation Fund, in partnership with the U.S. Fish and Wildlife Service(USFWS), are extremely satisfied with the results.

Since 1938, Blackwater’s 29,000-acre preserve has lost approximately 5,000 acres of marshland. Scientists predict that virtually all of today’s tidal wetlands in the Chesapeake Bay could erode to open water by the end of the 21st century, as sea levels rise at an incredible rate due to the thermal expansion of ocean waters.

According to area experts, from 1985 through 2015, the sea level in the Choptank River — the closest monitoring point to the Blackwater NWR— increased by more than 5 millimeters a year, which is among the highest amounts in the state.

This restorative process is vitally important to saving the marshes at Blackwater, which provide critical habitat for migrating birds and waterfowl and storm surge buffer for surrounding communities.

As Blackwater officials and wildlife advocates analyzed the conditions marshland conditions over the past several years, they quickly realized the landscape could not be fully restored to its 16th Century state.

However, to combat the rising tides and loss of land, the goal shifted to focus on how to best adapt to the changes that have already occurred, and those they could forecast, to preserve what was still salvageable on the site.

The project required the transfer of 26,000 cubic yards of sediment (dredge material) from the Blackwater River to the marsh surface in a process called “thin-layering,” with the goal of raising the surface of 40 acres of marsh to invigorate the growth of native marsh grasses.

The wetland restoration project is but a small part of the long-term strategies devised by a partnership of USFWS, The Conservation Fund, and Audubon Maryland-D.C. to ensure that the tidal wetlands in and around Blackwater NWR can continue to endure in the face of climate-driven sea level rise. 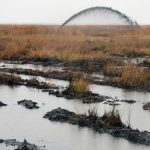 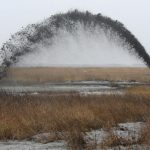 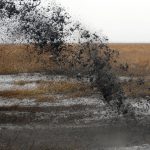 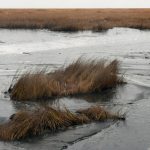 The restoration project at Blackwater NWR will benefit the wetland ecology at the refuge in several ways. Raising the surface of the marsh by 4-6 inches will improve the health of marsh vegetation allowing oxygen to reach the marsh plant roots and scientists expect native grasses will sprout through the dredge material within a year or two.

The results of the project should start to reverse the current disintegration of the marshland root zone, caused by excessive flooding, and add several decades to the life of the marsh. It should also restore the site to a high marsh condition, above the level of daily tides, which is the preferred habitat of Black Rail and Saltmarsh Sparrow.

Maryland’s Department of Natural Resources analysts say salt marshes are among the most valuable ecosystems in the state, as they help protect against inland floods, provide habitat for commercial fish species and filter pollution, functions that are thought to be worth several thousand dollars per acre.

The $1.1 million ongoing project is being funded with federal grants for coastal resiliency projects offered in the wake of Superstorm Sandy in 2012.

Federal officials recently announced the acquisition of 400 acres along the Nanticoke River from The Nature Conservancy. Much of the land in the acquisition isn’t consider prime marshland, but the plan is to convert the area to a primary habitat by 2050.