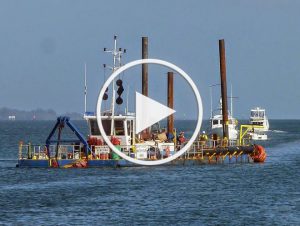 MELBOURNE — A dark gray muck slurry gurgled out of a black pipe as Amy Herrell and a few dozen others gathered near Sarno landfill to cheer a dredge’s first spoils pumped up from a half-century of muck buildup in the Eau Gallie River.

“It is finally here,” said Herrell, cofounder of a grassroots group that pushed to get the river dredged. “I always say ‘when the boat’s in the water, there’s water in the containment site, it’s happy-dance time,’ so you guys feel free to be happy and dance.”

The $24 million project will dredge about 632,000 cubic yards of muck (enough to fill 42,000 dump trucks) from 2.58 miles of the Eau Gallie River and Elbow Creek by December 2018. That will remove 1,200 tons of nitrogen and 260 tons of phosphorous from the river, according to the St. Johns River Water Management District, the agency overseeing the project.

The dredging is part of a more than $300 million, decade-long effort to remove nitrogen and phosphorus from the lagoon and its tributaries, such as Eau Gallie River. Fertilizers, grass clippings, septic tanks, leaking sewer systems and other sources have contributed excesses of the two nutrients, feeding algae blooms that killed off more than half the lagoon’s seagrass, countless fish and other wildlife in recent years.

The dredging project is contracted to Blue Goose Construction, based in Fort Pierce.

The muck is mostly fine-grained silt and clay and organic matter with some sand mixed in. It does not pose a health risk, district officials say, and during permitting tests for hazardous substances came up clean.

But wind, boat wakes and storms suspend the muck in the water, clouding the sunlight seagrass needs to photosynthesize. Nitrogen and phosphorus in the muck feed toxic algae blooms that kill fish and other lagoon life. So scientists say dredging the muck out could vastly improve the lagoon, and better land-use practices are needed to prevent more muck from entering the estuary.

Muck also damages boat motor cooling systems. The stuff’s built up so thick — up to 12-feet thick in some spots — that even canoes and kayaks get stuck.

The muck gets piped into two 28-acre rectangular containment areas off New York Avenue, where the water drains out. The sediments left behind ultimately goes to Sarno landfill.

DEP provided $20 million approved by the Florida Legislature in 2014 and 2015 for the dredging project. The Florida Inland Navigation District contributed $3.9 million toward project design, permitting and construction of the dredge material management area. The city of Melbourne chipped in $50,000 for the initial feasibility study. And Brevard County offered up the land for the muck containment area next to Sarno landfill.

Many at Thursday’s ceremony credited Steve Crisafulli, former Speaker of the Florida House of Representatives, and Rep. Thad Altman of Melbourne, for championing the project in the Legislature.

“There’s a lot more to do,” Crisafulli said Thursday from the dais. “There’s five to seven million cubic yards of muck out in the lagoon. That needs to be taken out. It needs to be dewatered. It needs to be brought up here.”

Dredging officials don’t know for sure exactly where they will be able to fit the dredge until the dredge gets there. Some tributaries and canals are too narrow for the dredge to maintain required setbacks form the natural shoreline, officials said.

Owners must first give the district permission to dredge within the 25-foot limit of private docks, piers, seawalls and other waterfront structures. Without owners signing a waiver, dredging can’t come within that 25-foot boundary.

But it’s not too late for homeowners hoping for dredging behind their properties.

Marry Ellen Piotrzkowski, who lives in a condo complex along Spring Creek, a narrow tributary to the river, hopes a dredge or whatever else it takes can clear out the creek. The creek dried almost completely out this week and teams with overgrown Brazilian pepper trees and other vegetation.

The fish, manatees and birds she and her neighbors once cherished are long gone.

“It breaks my heart,” she said.