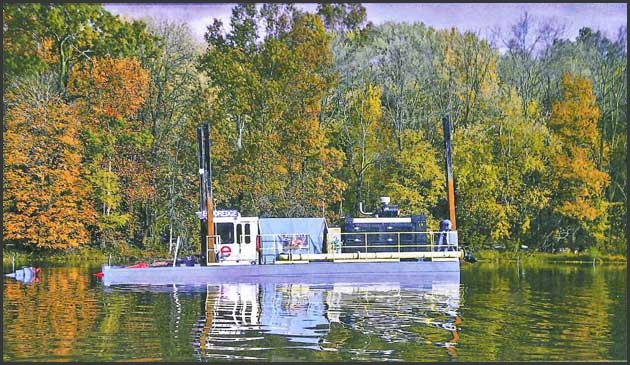 Lake Kittarnaqundi is a 27-ac. reservoir located in Columbia, Maryland, renowned as one of America’s first—and most successful—planned cities. In the spring of 2010, The Columbia Association, the owners of the lake, hired Cashman to clear the sediment and weeds that had accumulated since the lake was constructed. The Cashman team scoped out the project, identified two significant logistical challenges, and began the detailed planning that would enable them to get the work completed.

First, Kittamaqundi was clogged with water thyme (hydrilla vertieillata)—the aquatic weed with multibranched stems can easily reach lengths of 25 ft. Able to spread themselves from lakebed to surface, these fast-growing plants form densely tangled mats, which eventually interfere with normal water flow. Because hydrilla can shade out other ecologically important plants and actually alter water chemistry and oxygen levels, it is listed on the U.S. Federal Noxious Weed List. Experienced dredging professionals know all too well that hydrilla can wreak havoc with dewatering equipment, dramatically slowing the pace of work. Not only that; because the plant can regrow easily from stem fragments, it has to be removed with care. Cashman decided to harvest the lake, and remove debris from the shoreline and the lake bottom. Once this was done, dredging could proceed efficiently.

Second, in order to minimize disruption of daily life for nearby residents, the processing area for this particular site had to be kept to the smallest possible footprint. This challenge was given serious attention as the project plan was developed. Examination of the site showed that the material to be dredged varied greatly in composition; some areas were layered with superfine silt; in others the bottom was very coarse and sandy. Dewatering both kinds of materials was a necessity, as it always is (to minimize the tonnage) when dredged material must be trucked and disposed at a landfill. After considering the parameters of the project overall, Cashman managers opted for a hybrid approach to dewatering. They would bring in a mechanical dewatering unit and a filter press for the soupy mix drawn from the silty areas, dosing the slurry with flocculant as it was pumped from the dewatering unit to the press. Meanwhile, the coarser materials would be pumped directly into 200 ft long, 50-ft diameter geotubes. While geotubes and flocculant treatment also could have worked for the finer slurry, using geotubes exclusively would have required spreading the project out over a much larger area. Using the combination of mechanical dewatering units and geotubes enabled Cashman to confine their mechanical dewatering site to an area that measures less than an acre.

Cashman personnel, upon arriving on site, quickly noted another issue—perhaps not a major concern, but even so, one that would impact residents’ quality of life during the weeks the dredging work was ongoing: a much-used walking path would have to be blocked off. The project team quickly came up with a satisfactory solution. Before fencing off the walking path, Cashman crews created a trail through nearby woods and spread a thick layer of wood chips so people who were used to using the footpath around the lake would have a place to go for their daily walks.

It’s this kind of attention to every detail— before work even begins—that makes the difference between getting the job done and getting it done in the best way possible. Dredging is expensive work, a major investment. Clients expect the contractor to finish the job and finish it right, with all technical challenges met.

Beyond this, Cashman managers believe, the true basis of client satisfaction and, ultimately, the firm’s reputation, depends on the intangibles and immeasurables: protect the affected community from avoidable disruptions in their quality of life; keep change orders to an absolute minimum; and as work proceeds, live up to the client’s confidence in the dredging team’s expertise. All this can only be accomplished through thoughtful and thorough planning.