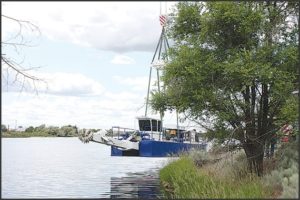 Starting July 1, the dredge begins removing 60 years worth of sediment buildup from the lake’s bottom.

The work starts near the mouth of Crab Creek, at Parker Horn, off state Route 17.

It means there are improvements in the water’s quality, with fewer weeds, less algae and increased fishing by providing a better fish habitat, according to a 2009 Columbia Basin Herald article.

Public recreation is not impacted by the work, explained Curt Carpenter, the Moses Lake Irrigation & Rehabilitation District’s manager.Carpenter and his staff operate the Ellicot dredge, which is owned by the district.

“The turbidity of the water shouldn’t change when we’re running it,” he said.

The dredge is operated during daytime hours.

The work is done in an area where there isn’t excessive boating and fishing, so they shouldn’t be disturbed, he explained. Once taken from the lake, the sediment is transported from a settling pond to Penhallurick’s property.

After there is enough material, the district puts the hauling project out for bid later this year.

The selected bidder takes the sediment to the district’s Connelly Park in between Moses Lake and Ephrata along state Route 17. Wednesday’s work placing the dredge in the lake went smoothly with the help of Duncan Crane Service, Carpenter said.

Between now and July 1, district staff is installing a 10-inch pipe running from the dredge, across the water, to the sediment pond. More staff training also takes place now that the dredge is in the water. Four employees are trained to operate the dredge. Permits allow dredging from July until the end of November and then in March.

“Weather wise, once it starts icing up, we have to get the barge out of the water so the ice doesn’t damage the barge,” Carpenter said. Coast & Harbor Engineering helped the district select the dredge, an Ellicott 370 HP Dragon model, said Aaron Horine, coastal engineer with the Edmonds-based company.

The engineering company is one of the entities involved with the district on the project, in addition to Grette Associates and the City of Moses Lake, he said.

They worked closely together to make sure everyone understands the intent and expectations of the project.

The company completed a design of the dredging area, completed modeling for the flow through the bridge and designed a sediment trap, or hole, at the bottom of the lake.

Workers remove sediment from the trap, instead of having to follow it down the lake.

The main idea with the sediment trap’s design was for it to act as a sump, so materials would fall into the deep hole.

There are some people who cannot access docks because of the sediment, he said.

Some factors include the production of the dredge and how quickly the material is removed.

Until the start of dredging on July 1, Horine said staff will probably run the pump on the dredge to ensure the equipment is working properly.

He worked with the same dredge model for projects in Western Washington and Texas.