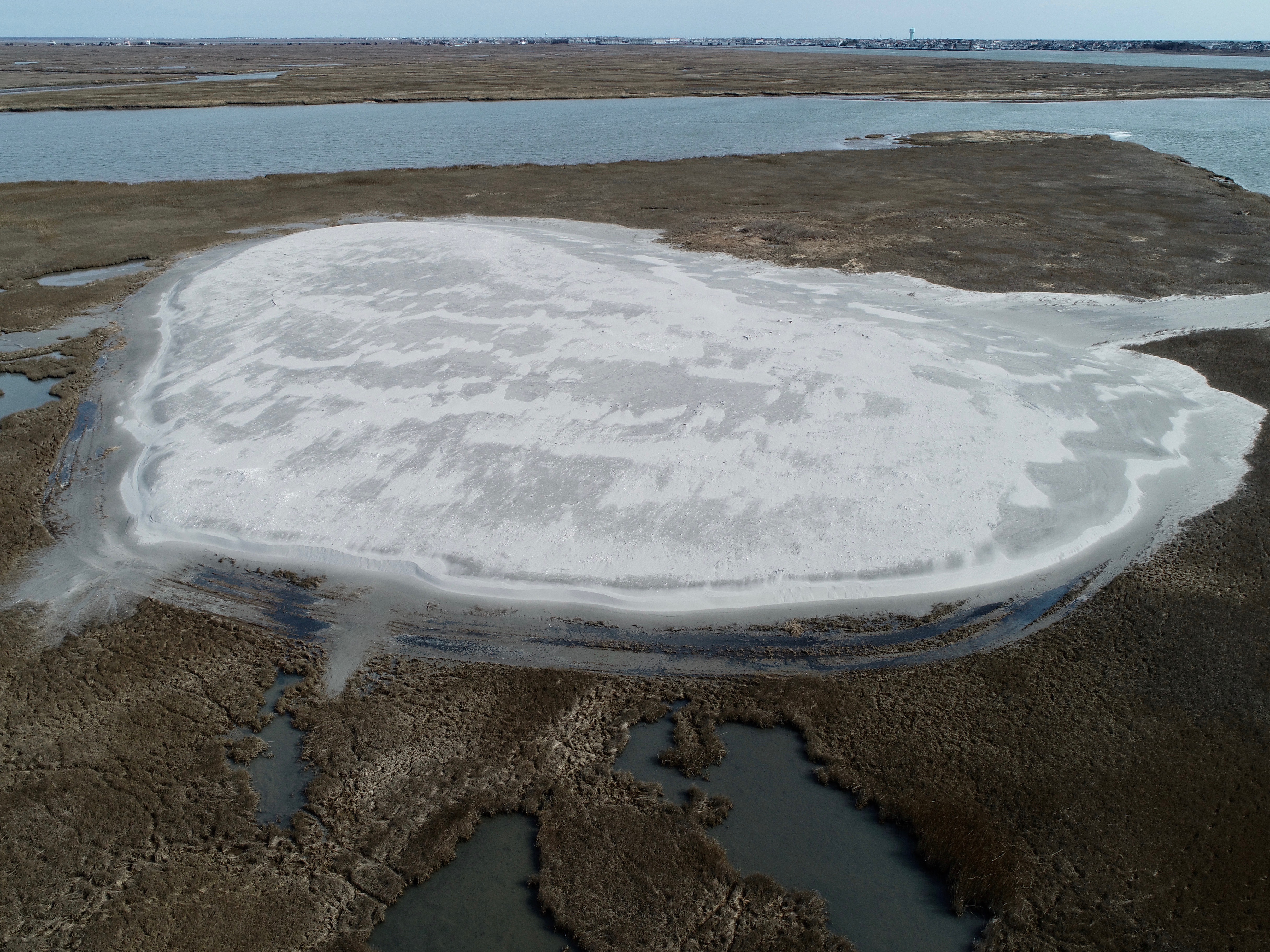 In April, the U.S. Army Corps of Engineers launched the Seven Mile Island Living Laboratory, designed to study and advance dredging and marsh restoration techniques in coastal New Jersey. The Corps has partnered with the State of New Jersey and The Wetlands Institute on the concept, which opened on April 8 with a site visit and a working group meeting on April 9. 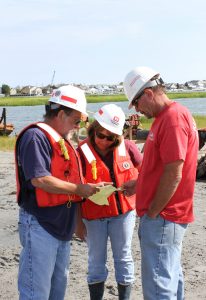 acres of state-owned marshland that provides both critical habitat for birds, fish, shellfish and other wildlife. It also provides coastal resilience for barrier island communities. The land is owned and managed by the New Jersey Division of Fish & Wildlife.

The idea for the living lab came from a similar project in The Netherlands. At a conference, Monica Chasten, Corps Philadelphia District, project manager, had a conversation with a Dutch colleague about how to bring stakeholders together to study and discuss problems and solutions. Her colleague pointed to Eco Shape, a public-private foundation focused on Building with Nature  principles. This spurred Chasten to help create something similar here.

The work at the living lab in New Jersey has been informed by a number of beneficial use projects done in the area. “We’ve been doing quite a bit of work since Hurricane Sandy,” Chasten said. The projects, done with the state and the Corps Engineering Design and Research Center (ERDC), use its Engineering With Nature principle, trying to meld navigation and ecosystem restoration.
The Corps has done a number of projects in New Jersey – four beneficial use projects since 2014, all performed by Barnegat Bay Dredging Co. Inc.

Beneficial Use on the NJ ICW

In August 2014, Barnegat Bay Dredging placed 7,000 cubic yards of sediment at Ring Island in Middle Township, New Jersey. A berm was formed for an upland bird habitat to attract black skimmers. The design was successful and brought the target species and many others, such as terns, terrapins and horseshoe crabs.

In December 2014, a marsh restoration project near Avalon placed about 500,000 cubic yards of sediment. Barnegat Bay Dredging did smaller pilot project first, trying to place a thin layer of sediment with no containment, which was successful. This small project informed a larger 35-acre beneficial use project from November 2015 to February 2016. The project used coir logs, staked down in specific patterns to contain the sediment. The design and placement location of the coir logs was determined by the New Jersey Division of Fish & Wildlife and The Nature Conservancy through a local grant. The design elevated the marsh; some included deeper areas and pools. Overall, about six inches of sediment was added. 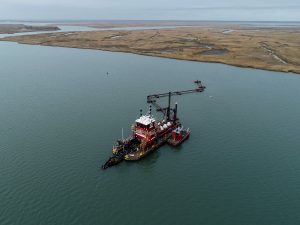 Barnegat Bay Dredging built a special nozzle during the pilot project, which sprayed the sediment for a thin-layer application. The coir logs help hold muddy materials in place.

“The big thing is trying to contain the material in different areas,” said Joe Hill, owner of Barnegat Bay Dredging. The dredging sites are very small. To do all the work, Barnegat Bay Dredging used its dredge Fullerton. A skid loader is used to maintain and move sediment as it builds berms or builds up certain areas.

The other challenge can be laying 5,000 feet of pipeline to effectively feed the spray nozzle in small, marsh areas. The nozzles can spray sediment up to 150 feet, but most of these smaller project require much more precision. “We’re learning all the time better ways to contain [the sediment],” Hill said.

In October and November 2015, the Corps and Barnegat Bay Dredging did a project at Mordecai Island in Beach Haven. (See “Barnegat Bay Dredging and Philadelphia District Establish Marsh Restoration Projects Along New Jersey ICW,” from the IDR January/February 2016 issue.)

A breach in the middle of the island had left it nearly split in two. The sand placement reformed the full island. In the winter of 2017 and 2018, Barnegat Bay Dredging returned to the island after some settling had occurred. As an adaptive management project, 1,500 cubic yards formed a berm to uplift the marsh.

The same procedure was used at Ring Island project in March 2018 to raise the island elevation with 1,500 cubic yards of sediment. “These are natural features, so they’re not going to stay in place forever,” Chasten said. The maintenance work at Mordecai Island and Ring Island “was demonstrating we could adaptively manage the site at a reasonable cost,” Chasten said. The state wants to build additional projects to work as a system, so every two or three years, sites can be adaptively managed in a rotation. The projects benefit ecosystem restoration and make use of the sediment dredged annually from the New Jersey Intracoastal Waterway. 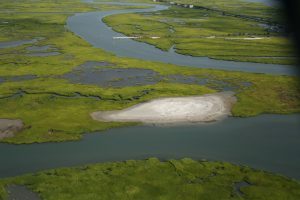 hasten said they had learned a lot from the previous three projects, and used a similar berm and fill design to raise the elevation of the island. The Great Flats site was designed as one acre of nesting bird habitat on the marsh. It was built using all sand, hydraulically pumped and placed into a berm configuration, dewatered through pipes and shaped into the final design and elevation by a small dozer.

The acre of marsh surrounding the bird habitat benefitted from a thin layer placement of fines to uplift the marsh and provide coastal resilience in the face of climate change. The Wetlands Institute assisted with site assessment on the project and will continue working to monitor site conditions and habitat usage.

The Corps and Barnegat Bay Dredging have learned a lot from these four projects, which will inform future work at the living laboratory and future beneficial use projects. 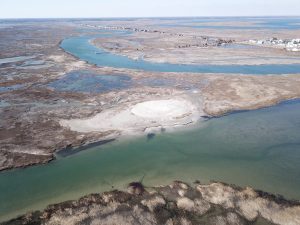 Chasten said they have seen a lot of success in these projects, but the lab will allow them to explore some of the tougher concepts. The challenges lie mainly with fine grain sediment, she said. While sand settles out fairly quickly, the fine grains stay in suspension much longer. Chasten hopes the living lab will provide more opportunities to study these systems and bring in experts to look at how sediment naturally moves within the system.

Fine grain materials might also be used more strategically by releasing them into the system, rather than building an island with it, and let the natural process move it – all things that can be studied at the lab.

The working group for the lab is formed from state and federal partners and some non-profit organizations in the region. “They are to help set up a forum for information exchange and discussion on some of the resources that need to be managed in the region,” Chasten said.

She said a goal of the kick off meeting is to help identify what methods need to be improved and how better to use a systems approach. “The Corps in investing some money into data collection to better understand the system and the natural processes in the system,” Chasten said. The kick off meeting will look at what data is available and where the gaps are, which will ultimately form the studies for the lab and future pilot projects.