Pounding from Storms Irma and Maria has Eroded Beaches 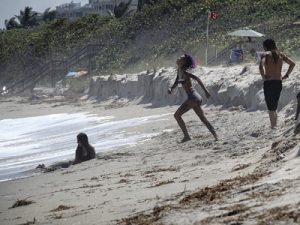 Erosion from Hurricanes Irma and Maria scraped about 1.4 million cubic yards of sand from Palm Beach County beaches that will cost about $40 million to replace, county officials say.

“We’ve had sustained rough seas from the two storms for two weeks,” said Taylor, 63, who captains the Black Dog charter fishing boat. “Usually, you get three to five waves and a lull. We’ve has steady waves with no lull.”

North county beaches were among the worst hit, according to Palm Beach County Environmental Resources Management officials. About a third of the total of 450 feet of dry beach lost to the storms was from beaches on Singer Island and north.

“The erosion from Matthew was localized, whereas Irma resulted in loss along the entire coastline,” said Julie Mitchell, programs supervisor with ERM.

“The dunes got crushed,” Chrissy Gibson, city spokeswoman, said of the extensive erosion.

During Hurricane Irma, wind-whipped storm surge was considered moderate in Palm Beach County with a gauge at the Lake Worth Pier measuring 2.23 feet of surge on Sept. 10. Miami-Dade County beaches suffered worse impacts from surge, with nearly 4 feet of water pushed ashore by Irma.

County officials will first knock on the door of the federal government. ERM officials will forward the $40 million estimate to the state, with will review it and send it to the Federal Emergency Management Agency for reimbursement.

The Army Corp of Engineers may also to pick up part of the tab, said Robert Robbins, director of ERM.

But that doesn’t leave local government off the financial hook. Palm Beach County asked and Jupiter agreed to chip in $72,000 two years ago for beach re-nourishment.

About $14 million is spent annually in local, county, state and federal money to replenish the county’s 47 miles of shoreline between South Inlet Park in Boca Raton and Tequesta’s Coral Cove Park.

Sand can be brought to beaches in two ways: off-shore dredging or bringing it in from inland mines. Which source is best for new beach sand must be determined by the county.

With dredging, more sand can be delivered in a shorter time, beaches can be widened 200 feet or more, which means re-nourishment projects can be spread out to every seven to 10 years.

But dredging costs are increasing as high demand for sand requires more to be screened to meet beach standards.

Using inlet sand can avoid the cost of a dredge — the fee can be $1 million a project.

How much is a cubic yard of sand?

The re-nourishment must be done between Nov. 1 and Feb. 28 to protect nesting sea turtles. The county spends about $13 million annually on keeping up county beaches.

Beach re-nourishment protects one of the county’s greatest economic engines — tourism. The process also protects nesting sea turtles. And the beaches keep open A1A, an evacuation route during hurricanes and other emergencies, according to ERM officials.

Taylor said he had a suspicion this year was going to be big for storms. Sea turtles have been laying their eggs higher up in the dunes than usual this year.

“When the sea turtles lay their eggs up high in the dunes, the native-Americans say it’s going to be a big hurricane season,” he said.