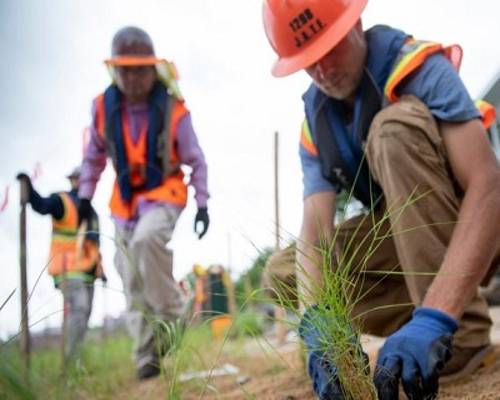 More than 89,000-cubic-yards of sediment packed with decaying organic material have been dredged from the Queens waterway as part of a $200 million cleanup project to restore wetlands to its shore, and to upgrade the sewer system that has been overflowing into it for years.

Most of the work, including the wetlands restoration, will be completed by the end of July, according to the city’s Department of Environmental Protection. ,

For years, New Yorkers have complained about the foul odor that rose up from the bay to greet them as they walked along the promenade. Even passing motorists couldn’t ignore the stench.

“You can actually smell the trees now,” said Shrinivasan Sewgobind, the DEP’s project manager, as he looked out over the more than three acres of new grass plantings. “I’ve never seen this sort of effort put into the bay, it’s quite an investment.”

Bordered by CitiField, LaGuardia Airport and industrial businesses, Flushing Bay serves as a vital route for pleasure boats, ferries and other vessels heading to the East River.

Environmental groups and local officials have tried to focus attention on the bay and it is chronic pollution issues.

“You have two major sewer outfalls here, and throughout the history of Flushing Bay there has been industrial activities,” said Sewgobind. “There was a build-up of organic materials that decomposed over time.”

A heavy rainfall or low tide would expose the stinky sediment, creating a smell reminiscent of rotting eggs.

Although State Sen. Jose Peralta has complained of the smell, he called Flushing Bay an “ecological jewel” in a statement, and hailed efforts to restore it.

Over the last year, workers removed about 78 piles from a decrepit pier that dated back to the 1939-40 World’s Fair held at nearby Flushing Meadows-Corona Park. They also dredged areas close to the promenade and removed contaminants and debris, such as old boat anchors and cables.

The shoreline is now being filled with 110,000 plugs of switchgrass, salt grass, seaside goldenrod, smooth cordgrass and other wetlands plants.

The young plants have been carefully fenced off and marked with red flags to keep away hungry geese, who are known to gobble them up before they can take root.

“Removing historical pollution, increasing the capacity of the sewer system to reduce overflows, and building new wetlands that will filter the water and provide a habitat for wildlife has created a new start for the ecological health of Flushing Bay,” DEP Commissioner Vincent Sapienza said in a statement.

Crews will monitor and replace the plantings if needed. The grasses serve as a natural barrier against erosion among other benefits.

“It helps improve the health of the bay,” said Sewgobind. “Some species are coming back … horseshoe crabs, turtles and birds we had never seen before.”

Additionally, the city made sewer upgrades in an effort to direct more sewage and stormwater overflows away from the bay and to a wastewater treatment plant.

Overflows happen when storm drains are connected to the same lines as sewers and the system gets overwhelmed during rainstorms, sending a mix of sewage and rainwater into the bay.

“Someone throws a bag of chips in the street, it ends up in a catch basin, floats into the water and comes out here,” Sewgobind said. “People need to remember that when they throw something to the curb.”

A related project to separate the combined sewer system in College Point is expected to be completed in 2021.

City Councilman Peter Koo, whose Flushing office often hears complaints about the bay’s stench, called the project “a good first step in reclaiming our waterfront.” He hopes the city will also put resources into cleaning up the heavily-polluted Flushing Creek, which empties into the bay.