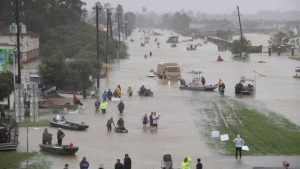 Hurricanes Harvey and Irma show us — as if we needed to be reminded — that coastal risks are rising. The very fabric of our coastal communities is being tested, while also showing the resolve and resilience it will take to stitch it back together. Most of this risk is a result of the rising tide of…people.

Coastal populations are swelling, which is putting many more people and much more property in harm’s way. What’s seemingly disregarded is that many of these development choices are doubly risky because we are building on top of, and degrading, our first lines of protection — our natural defenses. These are the wetlands and reefs that serve as barriers, buffers and breakwaters from rising seas, swell and storm surge.

While some may recognize that wetlands aid in flood reduction, most people do not recognize the role that coral reefs play.

Yet until very recently, it was not possible to put a value or price on that benefit. That is, there was very little direct evidence of how much coastal habitats — our natural infrastructure — help avert flood damages to people and property. There is surprising new data.

Coastal wetlands reduced property damages by as much as 30 percent in Maryland. The magnitude of the benefits was surprising given how many coastal wetlands already have been lost throughout the region. Somewhat surprisingly, even relatively small, thin bands of wetlands serve as an effective first line of defense and can be restored to build coastal resilience.

The benefits of mangroves are even more impressive. They reduce flood damages to people and property by 25 percent every year across the entire nation of the Philippines — a nation that sees more super storms and typhoons than almost anywhere else. Maybe more importantly, this is not just about reducing to property; mangroves annually reduce 23 percent of damages to the most socially vulnerable people- those living below poverty.

There is power in partnership. These studies arise from a unique collaboration between conservationists, lenders and the (re)insurance industry and was supported in part by Lloyd’s and the World Bank, among others.

And it is not just wetlands — coral reefs are likely to prove to be our greatest natural defense of all. Reefs reduce up to 97 percent of wave energy that would otherwise hit coastlines, averting hundreds of millions of dollars in flood in flood damages every year across the nations in Irma’s path.

What should we do? There are many solutions for supporting natural defenses. I would suggest two things to start — one public and one private.

First — as we prepare to recover and rebuild, let us invest in our natural infrastructure at levels consistent with the levels of protection they are shown to provide. Some of the Federal post-Sandy funding was a start; for instance, enhancing coastal resilience such as restoring salt marshes was included in support from NOAA and the Department of the Interior. But of the $50 billion that taxpayers spent rebuilding infrastructure, less than 1 percent was invested in the nature-based infrastructure that science shows us has been so effective. That’s not consistent with the benefits that wetlands, mangroves, and reefs can provide.

Second — insurers and investors should begin to price natural defenses into their products such as insurance and catastrophic hazard bonds. This creates critical incentives for restoring and conserving marshes, mangroves, coral reefs and other coastal habitats by individuals, towns, cities and states.

Ultimately investing in restoration pays off. For example, coral reef restoration was highly cost effective as compared against typical grey, or hardened, alternatives such as breakwaters. Risk reduction is always the sum of many actions and in places a mix of natural and grey might be the best choice.

The science, however, is clear — wetlands and reefs have high value for flood reduction and they contribute to livelihoods, fisheries and more. Now we have the science to value those economic and social benefits and we should; the long-term resilience of our coastal communities depends on it.